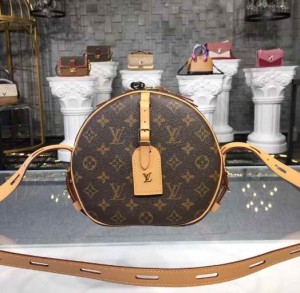 I'm going to look so cute wearing this. Probably a 6.5/10 from me, but most of what's in the boutique isn't getting 8/10. This is a hard-to-come by bag and I'm counting on no one, myself included, ever seeing the authentic. My primary concern is the luggage tag accent. Is the photo angle crooked or is it really asymmetrical?

It's a little rounder and has less of a flat bottom than the authentic. The vachetta is actually some sort of pre-treated leather and I think they nailed it. The canvas is a little dark and a little less golden than the authentic, but the graining and the way it reflects light around the seams is spot on. (So much variation on LV canvas... I'm partial to the very dark, very thick canvas they used on unisex bags in the 90s so this really works in my favor. I think it'll match my Amazon.) Glazing looks good. Alignment isn't perfect, but its as good as on the Louis Vuitton site. The embossing isn't as deep or as crisp as the authentic, but they even got the little trademark sign on the back. Stitching is a little thick, a little yellow, and a little sloppy, but unlikely to be noticeable when worn. I think the luggage tag accent is super wonky. The tab is too long, the buckle is not adorably square, the LV is too big, and it might not be centered. OC doesn't have it on the same notch as the LV pics, so this in particular is a pain to QC.